It looks like the no-sex hypothesis has (possibly) been debunked … by none other than an Olympian who’s on the scene, and did a little in-room test to see how the cardboard holds up under pressure.

Irish gymnast, Rhys McClenaghan, posted a video in response to reports the cardboard beds are meant to dissuade athletes from doing it in the village … and he’s calling BS, because the frames can apparently withstand his own bodyweight jumping up and down.
Check out his demo … the dude hops up and down on his own cardboard cutout, and the thing stays intact. Pretty interesting, but we’re not so sure that clears it up. Fact is … two bodies are heavier than one — even one that’s jumping. More testing is likely needed. 🤔
The sleeping arrangements for the Olympics have surfaced — athletes will crash on boxes, limit 1 per customer … something honchos apparently don’t want tested with bedroom shenanigans.
Check out the beds that have been set up all throughout the Olympic village in Tokyo, where world-class athletes will arrive by the end of next week for the start of the games. As you can clearly see, these babies are made out of good old-fashioned cardboard … seriously. 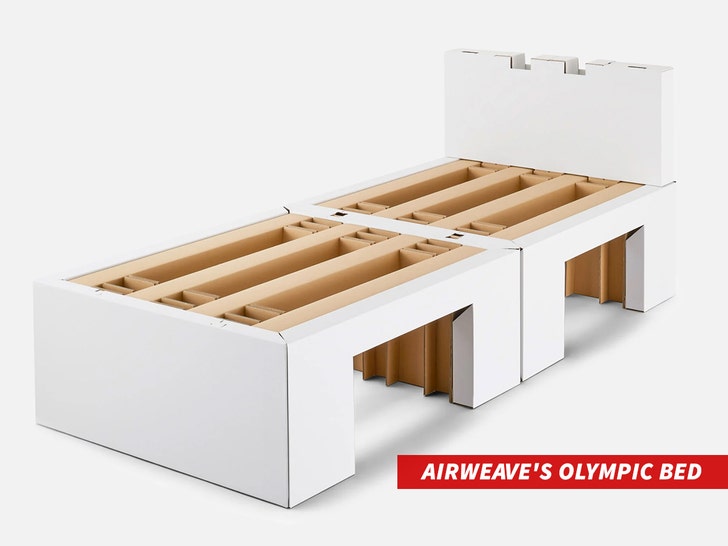 The beds’ frames and modest mattresses are designed by a company called Airweave — and they’ve cranked out upwards of 18,000 for the Olympics. Yes, they’re somewhat intricate in their structure and configuring … able to be adjusted to an individual’s liking/contortion.
However, a running theory is that the beds are made this way for a reason — namely, the International Olympic Committee and other organizers supposedly want to discourage sex among athletes … a pastime at the games that’s getting pooh-pooh’d this year due to COVID.
A handful of Olympic athletes — some who’ve already touched down in Tokyo, and others who haven’t — are testing positive for the virus … including U.S. tennis player Coco Gauff.
Still, U.S. track and field star Paul Chelimo got in on the joke, explaining that it was clear to him the Olympic powers that be don’t want any banging going on … because these beds, theoretically, only support the weight of one person. NBD for runners, though!!!
He writes, “I see no problem for distance runners,even 4 of us can do😂.” The implication being … runners are light, so a couple of them probably wouldn’t break the bed.
There’s also the tradition of handing out condoms, which got a 2021 asterisk. The Tokyo Olympics Organizing Committee reportedly told a Japanese outlet the condoms aren’t supposed to be used, but brought back to an athlete’s home country for safe sex education.
In other words … keep it in your pants this time around. That, or risk hitting the floor.