Putting “Vote By Mail” To The Test!

Vote by mail ballots in Palm Beach County may take only a few days to get to the Supervisor of Elections Office and be counted.

United States Postal Service reportedly warned nearly every state, including Florida, that there may be significant delays in getting mail-in ballots to their final destinations during the 2020 Presidential Election because of a high volume of mail.

In Florida, a mail-in ballot must be received by a local Supervisor of Elections Office by 7 p.m. on election night in order to be counted, leading to concerns that a backlog in the postal system could lead to uncounted votes.

A CBS 12 News study conducted during the first two weeks of August shows that envelopes with the same size, postage, and approximate weight of a mail-in ballot only take two to three days on average to get to their final destination.

The experiment, while not foolproof, does provide insight into how long it could take a ballot to get from your home to your Supervisor of Elections Office.

It began with 100 mock ballots. CBS 12 News staff mailed groups of 5 ballots from different mailboxes in every region of Palm Beach County. In total, 99 mock ballots were mailed out, after one was lost prior to being sent.

The mock ballots were addressed to a P.O. Box at the U.S. Post Office on Summit Blvd, not far from Palm Beach County Supervisor of Elections Office, the final destination for all real ballots in the county. At the elections office, a real ballot will have have a signature on the envelope checked against the existing voter rolls. If a signature doesn’t match, the ballot is put aside until the voter can come in and resolve the issue.

In the CBS 12 News experiment, on average, mock ballots took a maximum of 72 hours to reach the P.O. Box. 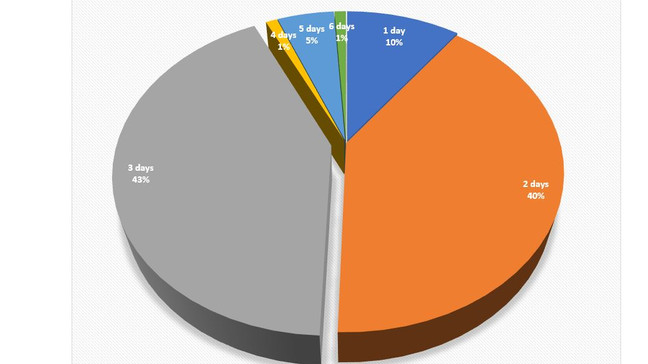 There were some outlier issues. Some mock ballots, sent from the same mailbox at the same time, arrived at the P.O. Box days apart. One ballot, sent from Royal Palm Beach, arrived a full six days after others that it was mailed alongside.

The CBS 12 News experiment could not control for the volume of mail, which could be much greater during the November general election and thus slow down the mail system. Additionally, the mock ballots were in plain envelopes and not marked with the typical intricate markings that are on real mail-in ballots. So, there is no way to be sure if mail carriers instinctively treat real ballots differently than regular letters.

Voters who are concerned about getting their mail-in ballots in by election day can always drop them off at an early voting site or your local Supervisor of Elections Office.