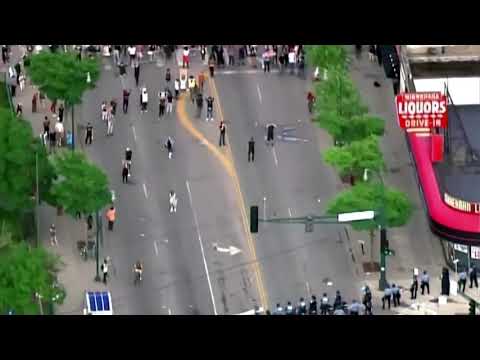 One group of protestors gathered on the corner of PGA Boulevard and Military Drive in Palm Beach Gardens, at one point marching down PGA. The demonstrators braved a rainstorm to make themselves heard.

Another group of protesters marched through rain in downtown West Palm Beach, the third march in that city since last Sunday. Over the weekend, police and protesters briefly clashed, resulting in a city-wide curfew.

Both marches following Sunday were entirely peaceful. At the end of Friday’s march, protesters gathered outside of West Palm Beach City Hall and thanked those in their ranks for peacefully making their voices heard.

The peaceful protests come as the city-wide 9 p.m. curfew remains in effect for West Palm Beach. At a press conference, officials encouraged peaceful protests and said law enforcement officers would do everything to keep demonstrators safe.