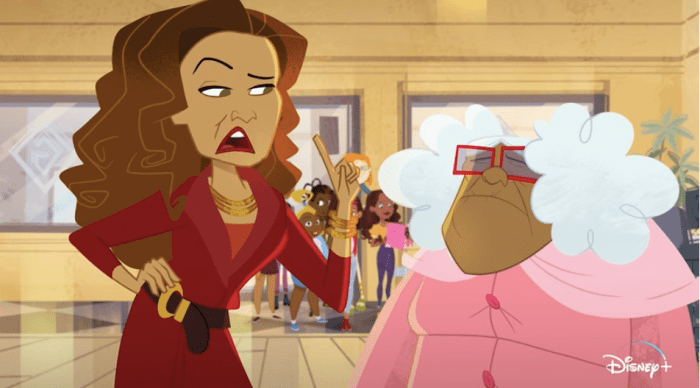 We’re excited to share a brand new sneak preview clip featuring Tina Knowles Lawson in her animated debut as a no-nonsense beautician named “Ms. Gina,” who is styling Penny Proud’s frenemy, LaCienega for her quinceañera on this Wednesday’s episode of ‘The Proud Family: Louder And Prouder’.

LaCienega’s quinceañera has finally arrived and she has very specific plans for it. When her cousin, LaBrea, an ugly-duckling-turned-beautiful-swan, threatens to steal her thunder, LaCienega grows increasingly hostile, which threatens to alienate Penny and her crew. Meanwhile, Sunset deals with her sister, Melrose’s, passive-aggressive critiques of every aspect of the quinceañera by choosing increasingly extravagant and expensive party elements that threaten to break the bank.

We’re already guessing that Ms. Gina has other plans in mind than giving LaCienega THAT hairstyle for her special day. Do you think she’ll get one of the classic Destiny’s Child styles instead? Also — we need the invite to the family watch party. We want to kick it with Blue Ivy, Rumi and Sir while they watch Grandma Tina get make her animated debut. Maybe they’ll have a watch party with Kelly Rowland’s kids too — Titan and Noah.

Can we just say how much we’ve been LOVING ‘The Proud Family’ reboot? It’s one of our favorite shows on Disney + for sure. If you’ve been watching, which episode has been your favorite so far? We really enjoyed the third episode where Penny Proud elevated to basketball star status and linked up with that tall fine brother Kareem. We also love the episode where Penny stood up for the kids at her school with two dads. This show definitely has some great messaging.