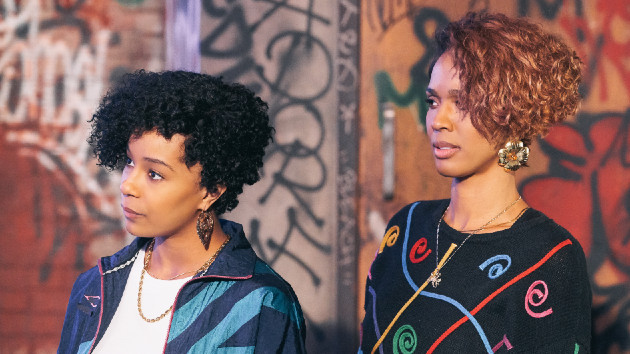 GG Townson and Laila Odom admit they had some pretty big shoes to fill when they took on the roles of hip-hop icons Cheryl “Salt” James and Sandra “Pepa” Denton.

While they both acknowledge the “pressure” in portraying hip-hop royalty, Townson, who stars as Salt, tells ABC Audio that having the actual artists on set came as a big relief.

“Once all the smoke cleared and the work had to get started… it was comfort having them on our side in our corner,” Townson explains. “There was no question that couldn’t be asked. There was always a plethora of answers — and who better to go to with the questions than the source?”

Townson says getting their immediate feedback served as a “seal of approval” that made their jobs less stressful.

“I definitely think that there was more support and just ease, because we didn’t have to guess,” she says. “It wasn’t a guessing game. Any question we had, they were there to answer.”

“And even if we took our own interpretation on certain things, they were quick to be like, “Uh, yeah no,” Townson laughs.

Her co-star Odom, who plays Pepa, agrees, adding that she noticed major similarities between her and Denton.

“So it was crazy how like the things that she would do and then Salt would be like, ‘Yeah, Pepa would do that. She would totally say that,'” Odom recalls. “So… like G said, having… them there… It was just ideal and perfect.”