The Palm Beach County Sheriff’s Office says deputies were “forced” Saturday to shoot and kill a young black bear roaming through a residential neighborhood after a trapper failed to show up, but wildlife officials said they had determined it was best to let the bear leave the area on its own.

FWC said there was no trapper involved at all.

Biologists had been monitoring the 300-pound bear’s wanderings for a week before deputies treed it behind houses in the Saratoga Lakes community, according to the Florida Fish and Wildlife Conservation Commission.

“In this instance, we were not waiting for a trapper since FWC staff determined the best approach was to let the bear leave the area on its own,” agency spokeswoman Arielle Callender said in an email reply to questions posed by WPBF 25 News Investigative Reporter Terri Parker.

A deputy responding to a call of a bear sighting shortly after 8 a.m. Saturday started trailing the bear through various wooded areas along Crestwood Blvd, the sheriff’s office said.

The bear was seen in the 100 block of Belmont Drive by a caller who said she and her husband were inside their home when she noticed a black bear inside her covered back porch, an area where her small children regularly play.

“The bear looked in her direction, which placed her in fear for her and her family’s life,” a Palm Beach County Sheriff’s Office statement said.

The deputy continued following the bear, which had climbed a tall tree in the 900 block of Crestwood Blvd. Additional deputies and FWC officers arrived on the scene.

Deputies and wildlife officers monitored the bear for several hours, standing at the bottom of the tree to make sure the bear did not climb down, according to the sheriff’s office. 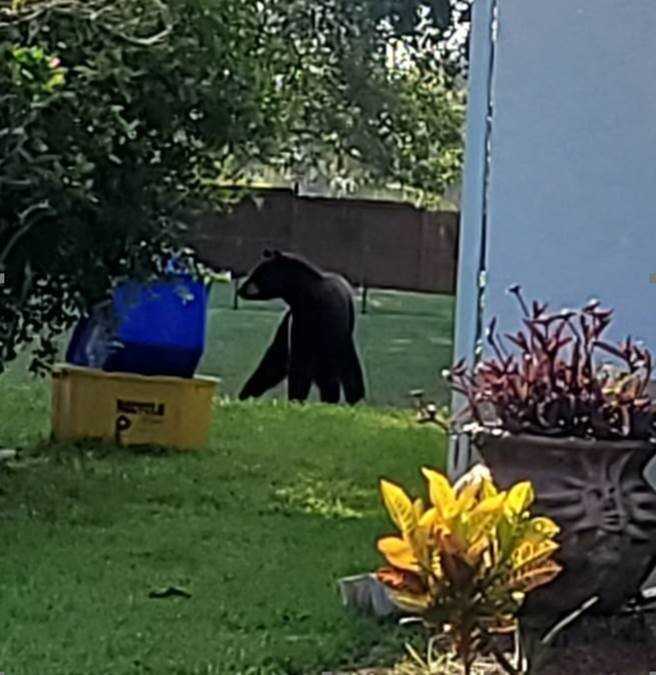 “PBSO’s role was to assist FWC Officers until they were able to locate a trapper, tranquilize the bear and relocate it. … After several hours of waiting for a bear trapper and/or a tranquilizer, from FWC, all was met with negative results,” the statement said.

At 12:25 p.m. that the bear began to climb down the tree despite deputies yelling and making noise in hopes it would climb back up, which it did, according to the sheriff’s office. Then the bear began to get restless and once again began climbing down the tree, which is when deputies decided to use shotguns to shoot and kill the bear.

Despite deputy assertions that the bear had “no place to roam” and was a possible threat, an FWC spokeswoman wrote:

“FWC staff determined the best approach was to let the bear leave the area on its own. We will have a report available later this week that will provide more details. Bears climb trees to avoid danger or to feed. This is typical bear behavior.”

It is illegal to kill a black bear in Florida without FWC approval or in the face of a threat to human life.

In this case, the sheriff’s office rationale was stated as:

“It should be noted that the bear had NO place to roam safely! The incident location and surrounding area are residential neighborhoods and fearing the bear would roam into the residential communities and/or impede traffic flow on the adjacent roadways PBSO was faced with making the decision to discharge their shotguns striking and killing the bear.”

When asked if FWC had a trapper on standby, a spokeswoman replied:

“According to FWC policy bears that do not pose an immediate threat to people are allowed the opportunity to move off on their own. Typically these animals find more suitable habitat without intervention. In cases where suitable habitat may be difficult to reach, FWC policy also allows for a trapping effort to be attempted. In this instance we were not waiting for a trapper since FWC staff determined the best approach was to let the bear leave the area on its own.”

FWC said it does have bear biologists on staff equipped with appropriate tranquilizers, and:

“Bears are humanely killed if they exhibit behavior that FWC policy has outlined as we consider a threat to human safety.”

The agency’s law-enforcement division is reviewing the incident and the bear’s body is now in evidence storage. A report will be released later this week.

The same bear had been believed to have been sighted and photographed several times over a week’s period in both Jupiter Farms and Royal Palm Beach. There were no reports of any attacks or threats to humans or pets.